Contact Us Donate Members & Volunteers Events Testimonials What We Do Home

Whenever you see a red word or phrase, mouse over it to see a photo of what is being described in the story.
A tap on your phone will also open an image.

The life of James "Jim" Grady Caudle began on April 10, 1933. By all accounts his birth took place in a small houseHouse where Jim was born and grew up on Pegram Street, Charlotte, NC 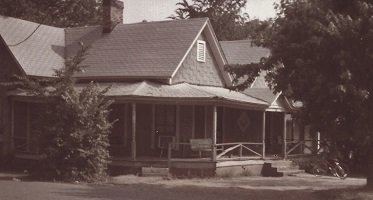 in the Belmont Section of North Charlotte, NC, on Pegram Street. His father, James Justice Caudle and mother, Ethel Green Caudle, and he lived in a neighborhood that was described by a younger cousin as "a mill town section of Charlotte with residents who were honest, hard-working and God-fearing people—good people, but certainly not financially well-to-do." (Jim would often tell the story about how, during his infancy, his bassinet was a dresser drawer.)

During Jim's toddlerToddler Jim with mother, Ethyl Green Caudle, circa 1934 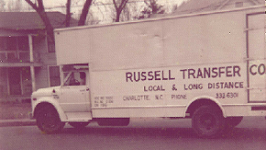 , and Ida Jane House Russel, became a single mom during one of the most-difficult times in our country's history, the Great Depression. 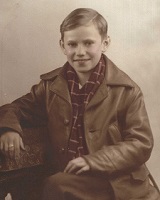 , an only child. During the beginning of Jimmy's years at Villa Heights Elementary School, Ethel's brother, Uncle Lester Greene, would pick up Jimmy after work on Fridays and take him to spend time with the female cousins who thought of Jimmy as their brother.

During the summer young Jimmy would spend time with the girls playing in the woods and the creek, eating green apples and wild strawberries. They would have contests to see who could dig the biggest sweet potato. At the time Uncle Lester did not have a son and considered Jimmy his own. He taught Jimmy how to shoot a rifle, and, as the story goes, they would shoot squirrels and rabbits that would end up on the supper table as part of the family's meal! Family accounts also lend insight into what would later become a passion for sports and recreation as Jimmy, wearing blue jeans, a white t-shirt and tennis shoes, would toss rocks in the air and hit them with a wooden rod/roller used on roll-up window blinds of that day.

(later known as BoBo) in the early 1940s. Bobo was an active non-commissioned officer with the United States Army in Charlotte, NC. Soon thereafter, Sergeant First-Class Borek was transferred to a US Army camp in Birmingham, AL, where Jimmy spent his junior high school years.

, whom he loved very much, and he would continue to pursue his dream for sports and learn the game that has become known as America's pastime—baseball!

Life would continue to change as, in 1945, his step-father discharged from the US Army and moved his family to Miami Springs, FL, to a small house on Carlisle Drive. The attraction for the move to Miami Springs was the recently incorporated Eastern Airlines based at Miami International Airport, where Bobo was hired and began employment in the Propeller "Prop" Shop.

. His athletic ability and prowess were getting noticed when an article appeared in the Sunday edition of the Miami News, April 1951Photo of Jim in article about him playing at Miami Jackson High 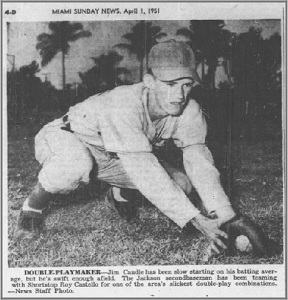 , touting that "Jim Caudle and a teammate, Costello, had become one of the area's slickest middle-infielder duos" of that year. 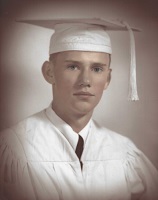 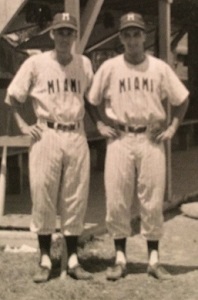 , where he began his collegiate career in 1952, as well as playing middle infielder on the Miami Hurricanes 1955 and 1956 baseball teams under Head Coach/Manager, Major League Baseball star and Hall of Famer Jimmie Foxx. Jim was also given a tryout during the 1956 Spring Training Major League baseball season with the Cincinnati Reds.

You'll notice a gap here between 1952 and 1955. It represents another "turn" in the life of James "Jimmy" Caudle. Uncle Sam (the United States Army) came calling by way of the draft. Jim was shipped to Fort Lewis where he proudly served in the 55th Military Police Group from 1953 to 1954, outside Uijeongbu, Seoul, South KoreaKorea pics collage 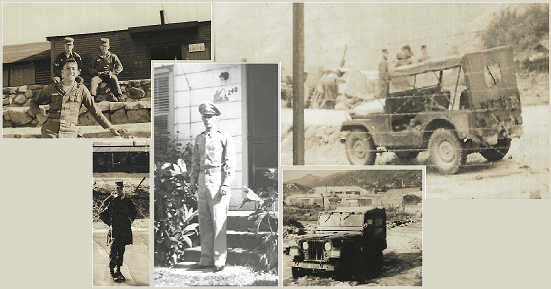 . During his deployment Jim served as Border Patrol and was awarded the Expert Rifle MedalUS Army Expert Rifle Shooter Medal on Army jacket

for superior marksmanship. It appears Uncle Lester's shooting lessons back in the day were "on target" and paid off! Jim often told one of his most memorable and touching stories about a little Korean girl who would periodically show up outside the guard post, hungry and looking for food. He never learned her name but was quick to provide whatever rations were available. Jim's heart for children was being born!

Upon his return to the States, Jim resumed his collegiate career and in the summer of 1956, while playing in a summer semi-pro baseball league sponsored by Zimmnox Corp. in Steubenville, OH, Jim played with Marcus Ferrelli, a pitcher who also played for the University of Michigan. This teammate relationship led to yet another life-changing event. You see, Jim met Marc's sister, Judith, who with a twinkle in her eye stole the heart of Jim Caudle. A dating relationship began, and Jim and Judi were marriedJim & Judi wedding collage 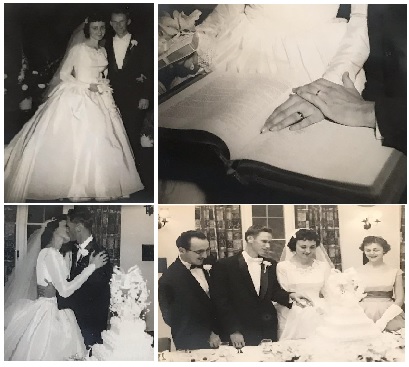 on October 26, 1957, in Judi's hometown of Weirton, WV. The newlyweds then moved in to their starter home on Wren Ave. in Miami Springs, as Jim had taken a position with the Miami Springs Recreation Department in late 1956, his first job.

At this point one would think it appropriate to say, "And the rest is history!" Yet history is still in the making. A Legend is being born!

In Miami Springs, FL, 1957, Jim's heart for kids, his passion for sports and love for his family led to the beginning of his pursuit for developing a community recreation center. As Athletic Director in Miami Springs, his dream and his vision began to come alive! 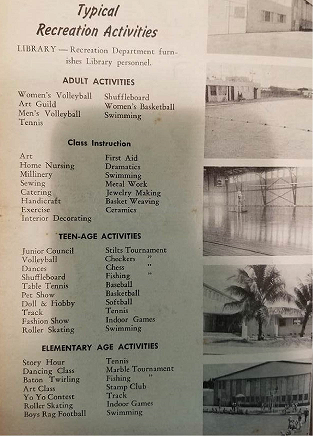 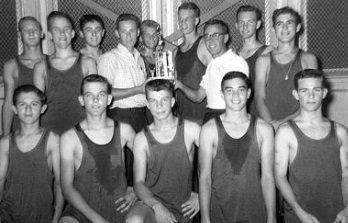 In January 1960, Judi gave birth to their first born, Kimberly Joy, and during the next 10 years sons Daniel Layne and James Christopher Caudle followed. Each have contributed in their own ways, following in their father's footsteps and dreams furthering and affirming the cause of the now Coach Caudle Cares Foundation. 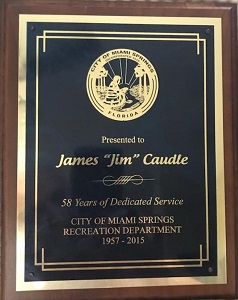 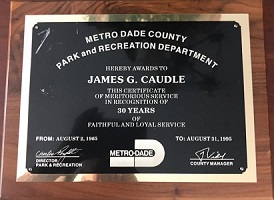 Beyond that, Jim was also a public servant. His love, passion and concern for his beloved city resulted in his election for two terms on the Miami Springs City Council as well as becoming Vice Mayor. Jim also held many positions with the City of Miami Springs: Athletic Director, Coach of all sports, overseeing all events at the Recreation Center, dances, adult volleyball, teen-age sock hops, national competition in volleyball, men's basketball, and recruiting sponsors for youth baseball and football uniforms. 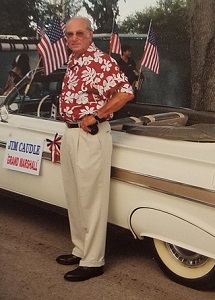 , and on December 19, 2020, the City of Miami Springs dedicatedStreet dedication ceremony 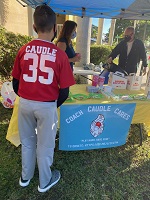 , which runs between the recently built Community Center (on the grounds of the recreation center Jim created) and the baseball and football fields where Jim's career began. 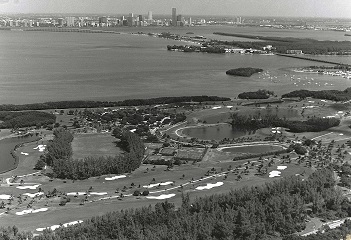 . Jim went to work and, in a very short period of time put it "on the map!" It became a world famous golf and country club where numerous golf tournaments were hostedJim addressing attendees at the 1987 Gus Machado Golf Tournament, Key Biscayne Golf & Country Club 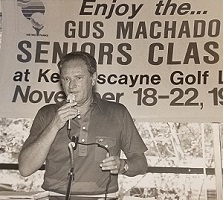 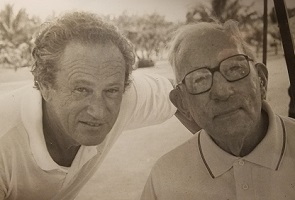 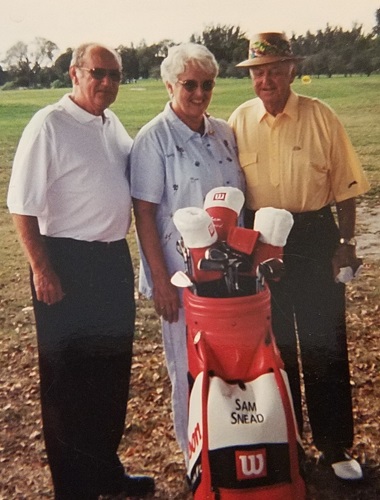 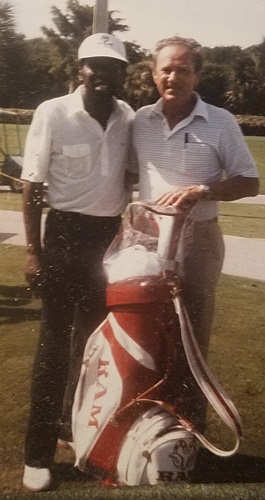 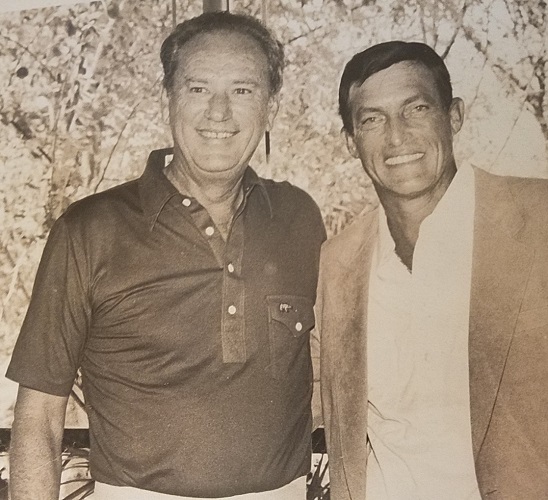 , just to name a few. Jim often told the story of how Don Johnson would call him personally and let Jim know he was going to arrive at the golf course in his boat so that Jim could pick him up in a golf cart and take him to the pro shop and check in! Also while managing the country club, Jim appeared in several TV commercialsTV commercial shoot 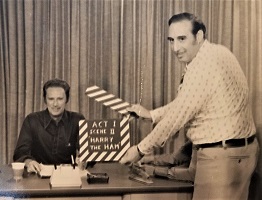 , displaying his loveable personality, humility, sense of humor and smile.

Among many other friendships they had in Miami Springs, Jim and Judi were close friends with Art and Joan Bruns. Art was owner of The Villas, which housed the famous King Arthur's Steakhouse and had an affiliation with the NFL's Miami Dolphins. It was through this relationship that Jim and Judi developed a long-time friendship with another well-known Miami celebrity at the time, Chuck ZinkChuck Zink aka Skipper Chuck 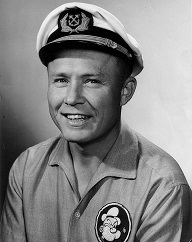 , aka "Skipper Chuck," whose children's television show with its wide variety of personalities touched many hearts and lives of that day.

Jim's love for the game of golfGolf wall pics collage 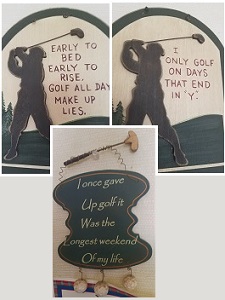 would take him to The Masters2008 Masters Golf Course memorabilia 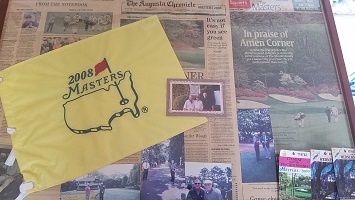 in Augusta, GA, the historic Pinehurst Golf & Country Club in Pinehurst, NC (founded circa 1895), The Village Course in Kapalua, Maui, HI, and, yes, a visit to and a round of golf on a course considered to be the oldest in the world, the Old Course at St. AndrewsThe Old Course at St. Andrews, Fife, Scotland, considered the oldest golf course on Earth 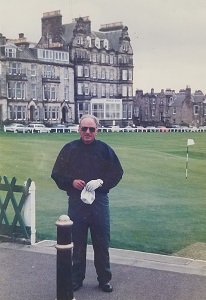 Jim would also be called to return to the Miami Springs Golf & Country Club later in his life to provide assistance with revitalizing the business of the golf course.

Presented by Thumbs Up Productions

James Grady Caudle's life and legend are far reaching. Who would have thought that this only child, born during the Great Depression to a fragmented family, would rise to such greatness? A young boy having to face the most difficult times any of us could imagine. Discouraged from playing baseball, but pursuing it, which ultimately led to his success! And a two-year interruption during college when he was drafted by the US Army and deployed to Korea.

As you have heard, Jim was quite a storyteller! We're told one of the reasons he loved telling his stories was to make people smile. Why? "Because when you're smiling you can't be mad!" When we listened to his stories about growing up and all the adversity he faced, all we heard was graciousness, humility, positive fond memories, humor, a strong belief in his faith in God and a consistent preaching/teaching of perseverance, consistency and one basic philosophy he communicated to everybody—Play Hard, Have Fun!

Isn't that what it's all about? An incredible sense of humor tempered with meekness! Meekness has been described as strength and power under control. He was humble, and he had a strong work ethic, consistent and organized. That's Coach Caudle! He never raised his voice. He had "the look" for sure. All of us new precisely what he was communicating, and yet we had a healthy fear of him born out of respect. We wanted to play hard for him. We wanted to win for Coach Caudle and he wanted us to have fun! It made ALL of us better men and women today! These attributes are certainly part of Coach Caudle's legacy.

In addition to his many accolades and accomplishments, there is one underlying message and motivation that must be acknowledged that is a large part of Coach Caudle's legacy. That is familyFamily wall pics

! Jim Caudle was motivated by his love of and for his family. Wife of 62 years, Judi, children Kimberly, Dan and Chris, grandchildren Kyle, Kelsi, Megan, Jacob and Marley, daughter in-law Lourdes Saad Caudle and late arriving son in-law Michael White all have a hand in the development of the Foundation.

Coach Jim Caudle's fingerprints are found all throughout the City of Miami Springs and Metro Miami-Dade County. His Life, Legend and Legacy are a testimony and tribute to Coach Caudle that continues today and will live in our heartsDrawing by Megan Caudle